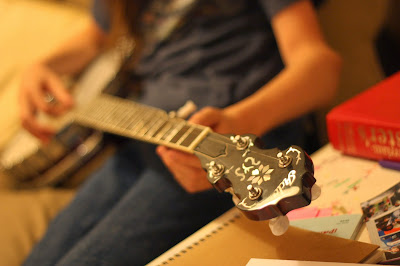 This is fourteen.
Fourteen stands in the bathroom doorway with a smear of foam above his lip and a razor in his hand, chatting into your bedroom. You remind yourself to pay attention. In four years he will be gone. You put a finger in your book to keep your spot while your manchild fills the doorway with his tall, talking self. You remind yourself to listen to what he's actually saying, not just to the fact of his little lemon-drop voice getting buried in gravel. Fourteen is confessing how he kind of still wants to have a job like in Richard Scarry’s Busytown. He wants to work in a paper factory or a fabric mill or inside the enormous cross-sected engine room of a ship. “I mean,” he says, “Believe me. I know those are all totally crushing jobs in real life. But still.”
Fourteen watches The Possession, The Shining, The Birds with buoyant delight, but looks on with frank, exaggerated horror when you pluck your chin hairs in the bathroom mirror. You can tell from his expression that every revolting thing in the world has been concentrated in the lower part of your face. When you catch his disgusted eye in the mirror, he reshapes his mouth into an apologetic smile. You stick up your middle finger and he laughs, leaves the room noisily beat-boxing.
Fourteen picks up a banjo to accompany his sister on guitar. He bends over her math homework, his long hair hanging into the long-division problem he is patiently explaining. He says to her, in the cat’s cranky voice, “Great. Now I have to wash all over again because you pet me.” When she snatches her hand back from the cat’s damp fur, you remind her that it wasn’t really the cat complaining, and Fourteen says, in the cat’s cranky voice, “Yes it was.”
Fourteen is full of sudden domestic judgments. “Does the kitchen sponge have to be so gross?” (Yes.) “The recycling smells.” (Indeed.) “Didn’t our floors used to be nice and shiny?” (They did!) Coming in from his monthly lawn mowing, Fourteen manages to communicate more overheatedness than a supernova. He flops on the couch, conspicuously fanning himself, and asks, breathless and, it would appear, having a small stroke, if you wouldn’t mind getting him a glass of ice water. You bring him the water, then can’t help yourself. “Fourteen,” you say, “it’s, like, ten square feet of mowing. I think you’ll be okay.” “You’re welcome,” Fourteen says. You’d love to stay and argue, but you have to rush out and buy him pants, pants, and more pants. The getting of pants is your new full-time job. If you listen hard in the night, you can hear his legs growing.
Speaking of the night: Fourteen no longer looks like a baby while he sleeps. For years, even as his limbs stretched and dangled, his dreaming face regressed to the contours of infancy: downy cheeks, pearl of nose, the pink, pouched lips of a nursling. But now that it’s been kiln-fired, the face has taken this opportunity to chisel out its jutting new edges: brow and jaw, nose and chin. Like a Neanderthal crossed with a peach.
Fourteen sits on a stool with a wooden spoon in one hand and a fork in the other, eating buttered noodles right from the pot. Fourteen and three friends eat two pounds of bacon in four minutes. Fourteen is a bottomless pit, and you secretly love this, although you don’t know why. Probably because feeding him is your idiom for loving. As is grabbing his face in your two hands and kissing his reluctant cheeks, breathing in his fleeting scalp.
Fourteen is lazy in the best possible way. One day you and he lure the cat into bed with treats, then spend the glorious start of the weekend in leisurely conversation about Friskies Party Mix. “If they were human treats, which flavor would you pick?” He shows you the package and you pick Meow Luau. He picks Mixed Grill, then asks which you would pick if they were still cat treats but you had to eat them. You both pick Cheezy Craze. The cat snores softly, draped over your four shins. An hour passes. “This,” Fourteen sighs happily, “is a classic Friday afternoon.”
Also in the worst possible way. You have been arguing for fourteen years about his teeth and whether they really need so much brushing. “Fine,” you say evenly, one night. “Don’t brush them. They’re your teeth.” Oh god!” Fourteen says, his indignant voice like a deep-dug hole. “Mama! Jesus. That’s brutal! You still have to make me.”
Fourteen scrambles into his enormous boots to take a walk when you invite him. The oak leaves on the ground are thick as leather, and they fill you with joy and sadness. In four years he’ll be gone. These are the same oak leaves that Fourteen crunched through when he was a chubby, staggering toddler, proud in his brown lace-up shoes and knee-deep in autumn. “I feel like we’re just walking through the leaves, and the calendar pages are flying off, and we’re already walking through the leaves again,” you say, and Fourteen says, “I know, right? Even I’m starting to feel like that.” He bolts away to look at something, then smiles at you from a patch of sunlight. And it’s not so different from when he was two: all you can do is be there, open-armed and always, in case he turns. In case he runs back.

This is the fourth episode of This is Adolescence, an essay series conceived by Lindsey Mead and Allison Slater Tate, and which I'm just completely thrilled to be a part of. Please read the lovely first trio of installments, each of which made me remember a detail of my recent past so acutely that I had to write it in my journal: 11 here, 12 here, and 13 here. And coming up: 15, 16, 17, and 18, god help us.